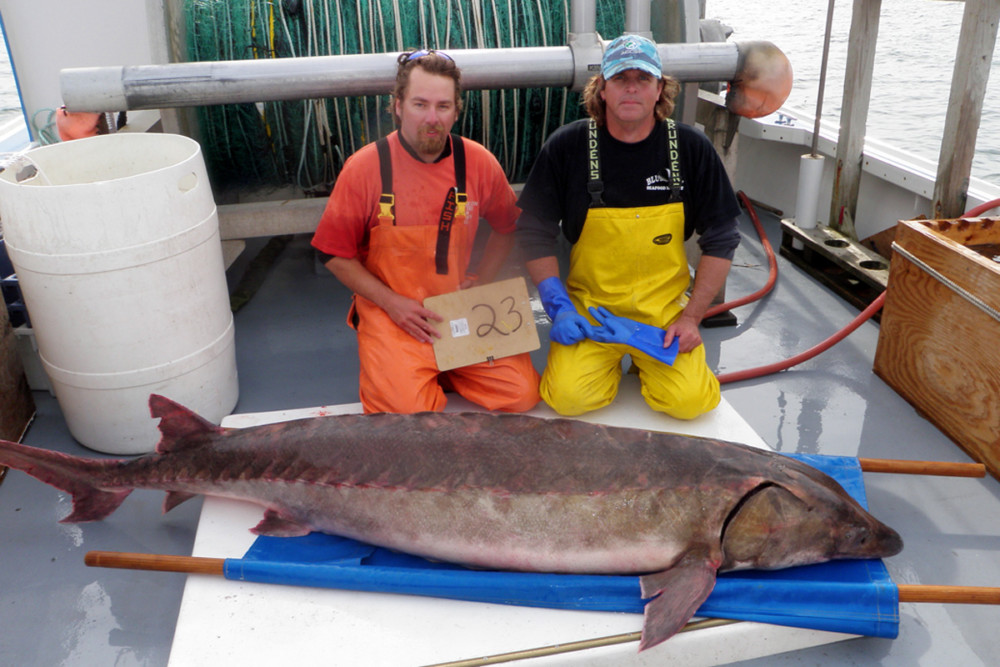 The Plight of the Atlantic Sturgeon: Can these prehistoric fish make a comeback?

A fish that has existed since dinosaurs roamed the earth is at the center of a battle between environmentalists and the policymakers who they say aren’t doing enough to stop the species from disappearing from the Delaware River forever.

The Atlantic sturgeon can grow up to 16 feet long, weigh up to 800 pounds, and live to 60 years old. The fish are anadromous, meaning they are born in freshwater, migrate to the ocean, and then return to freshwater again to spawn every two to five years.

Though Atlantic sturgeon still return each spring to lay their eggs on the bottom of the Delaware and can jump from the water like whales — you’ve likely never seen one. Their population in the river once totaled around 350,000, and their eggs were prized for caviar in the late 1800s and early 1900s. But their numbers dwindled due to overfishing and never bounced back. In 1997, a coastal ban halted their harvesting, and the species was listed as endangered in 2012.

Today, only around 250 adult Atlantic sturgeon remain in the Delaware, according to a recent estimate from a U.S. Geological Survey-led study. They face threats including habitat degradation, water pollution, and ship strikes.

“You have this fish that most people don’t know about or care about, it’s not particularly attractive, and then when you start talking about making changes to shipping – which supports tens of thousands of jobs in the area and drives the economy – then it becomes very controversial,” said Dewayne Fox, a professor of fisheries at Delaware State University and one of the study authors.

For four weeks every spring, Fox boats along the river – back and forth from Marcus Hook to Tinicum – tracking Atlantic sturgeon. He docks in front of Subaru Park in Chester, where he often sparks conversation with curious locals.

“When I show them pictures and say, ‘This fish is out there in the middle of the river right now,’ it just blows their mind,” he said.

The Delaware Riverkeeper Network launched a “Dino in the Delaware” campaign to put a “face” to the endangered fish, including an I-95 northbound billboard featuring the Atlantic sturgeon with the headline “Extinction Sucks” this past spring. And last month, members of the Riverkeeper Network and other activists led a “funeral march” at Philadelphia’s City Hall to raise awareness about the Delaware’s declining sturgeon population.

Moreover, she believes the plight of the sturgeon is representative of greater harms facing the Delaware River basin, which provides drinking water for more than 17 million people.

“The pollution, the dredging, the deepening, the habitat destruction, the climate crisis – all of these things that are fundamental to the loss of the sturgeon are also fundamentally harmful to oyster populations, migratory shorebirds, and horseshoe crabs, and all of the jobs and local economies that depend upon those species,” she said.

On Dec. 1, the Riverkeeper Network celebrated what they are calling a major win for the Atlantic sturgeon: In a rare move, the U.S. Environmental Protection Agency granted a petition that called for more stringent standards for improving the Delaware Estuary’s water quality and protecting the fish. Specifically, the EPA determination called on the Delaware River Basin Commission (DRBC) – the interstate agency responsible for managing and protecting the river system – to raise its dissolved oxygen criteria for the river to “protect the propagation of resident and migratory fish species.”

Fish require dissolved oxygen to survive. When oxygen-depleting materials are discharged from wastewater treatment plants into the river, bacteria sucks up that oxygen, sometimes to such an extent that a body of water can be rendered “dead.” Juvenile sturgeon are particularly sensitive to low dissolved oxygen levels, according to David Keller, head of the fisheries department at the Academy of Natural Sciences at Drexel University.

Then, the DRBC resolved to partner with research institutions to study dissolved oxygen thresholds in the Delaware River Estuary in 2017. One such report, authored by Keller and Academy of Natural Sciences colleagues, concluded that juvenile Atlantic sturgeon need a minimum dissolved oxygen level of 6.3 milligrams per liter.

The DRBC extended the deadline to initiate a change to its water quality criteria due to the pandemic. Fed up with the DRBC’s timeline, the Riverkeeper Network and several environmental organizations filed a petition to the EPA in April, to commence a separate action to revise water quality standards for the protection of aquatic life in a portion of the Delaware River Estuary.

In a statement, the DRBC called the determination “unnecessary” given “the significant progress DRBC has already made — working in close collaboration with EPA and state co-regulators — to update the Estuary aquatic life use standards.”

During a public meeting in December, DRBC Executive Director Steven Tambini emphasized that in its determination, the EPA also acknowledged and thanked the DRBC for its commitment to improving water quality standards in the river. He said that the EPA’s 12-month timeline to “develop proposed regulations” to revise water quality criteria aligns with the DRBC’s plans.

Keller says the DRBC has a big task ahead when it comes to revising dissolved oxygen criteria.

“It’s a very big decision to make — a decision that has a lot of ramifications for everyone that lives in the basin. It’s going to take a lot of effort, depending on where the criteria is set, that’s going to influence everyone that discharges to the Delaware,” he said.

“In terms of the number one source of in-river mortality for adult Atlantic sturgeon, it is vessel strikes. Full stop. There is no question in my mind,” Fox said.

The Delaware River Port Complex (which includes Philadelphia, Camden, and Wilmington) is the world’s largest freshwater port. The Army Corps of Engineers embarked on a $400 million dredging project a decade ago to deepen a 100-mile stretch of the river to accommodate even larger vessels.

While cargo ships in the Delaware are here to stay, the government must devise creative solutions to help Atlantic sturgeon and vessels coexist.

One case study that could be emulated: the North Atlantic right whale. One of the largest sources of mortality for the endangered species is fishing gear entanglement. In response, the National Fishery Service has mandated special maritime transit zones and provides real-time information to help ships avoid these animals.

“Maybe we could employ some of those same tactics in the Delaware,” Fox said.

Fox thinks it amazing that any Atlantic sturgeon are “still surviving” at this portion of the Delaware River — surrounded by industry, pollution, and cargo ships. It’s proof that “nature will find a way,” as Fox invoked Jeff Goldblum’s famous line in “Jurassic Park.”

“If we humans could just get out of the way, I have no doubt that sturgeon would start to recover on the Delaware River,” said Fox.

Cover photo: Matthew Breece, of the University of Delaware, and Captain Kevin Wark reveal an Atlantic sturgeon collected during a spring sampling program off the coast of Delaware in 2010. (Courtesy of Dewayne Fox / Delaware State University)

If you love what we do you can support our mission with a one-time or monthly contribution.
Become a Supporter
Tags: Atlantic Sturgeon, Delaware River

Lauren Ingeno is a Philly-based freelance writer and editor who covers science, health, and humans. She is a mother to one mischievous tabby cat, and in her spare time enjoys dancing, finding the best sandwiches in Philadelphia, and being in and around water. Follow her on Twitter (@laureningeno) and subscribe to her newsletter: stopgap.substack.com. View all posts by Lauren Ingeno

Activities include Bird walks, Paddles, Farm days & more As a celebration of our glorious watershed, the Delaware River Festival continues through this weekend. The 23 environmental centers that make up the Alliance for Watershed Education of the Delaware River are...
Keep Reading
October 01, 2021 | 0
by Julie Hancher
Events

Events will be both online and in-person to reach a wider audience this year. The Delaware River Festival is back from September 24th through October 3rd. Events include paddling, nature walks, kite flying online story readings, animal presentations, sponsored evenings...
Keep Reading
September 16, 2021 | 0
by Julie Hancher