City folk may feel distant from coal, but effects are felt downstream

Much of Pennsylvania was once regarded as an American mining hub, but now less than 50 active coal mines remain. Through the de-industrialization of the Commonwealth, the process of cleaning the environments affected by decades of active mining has long been neglected. Over 15 billion tons of coal were removed from Pennsylvania, leaving 250,000 acres of mine lands abandoned. This lack of foresight led to a litany of environmental issues affecting the entire state for decades to come.

The Eastern Pennsylvania Coalition for Abandoned Mine Reclamation was established in 1997 to clean, correct, and revitalize PA environments damaged by mining. Under the EPCAMR’s official mission statement, their work focuses on “reducing hazards to health and safety, eliminating soil erosion, improving water quality, and returning land affected by past mining practices to productive use.”

The EPCAMR works in 16 counties throughout Pennsylvania, focusing primarily on Northeastern PA. However, the effects of their work are felt downstream in Philadelphia. 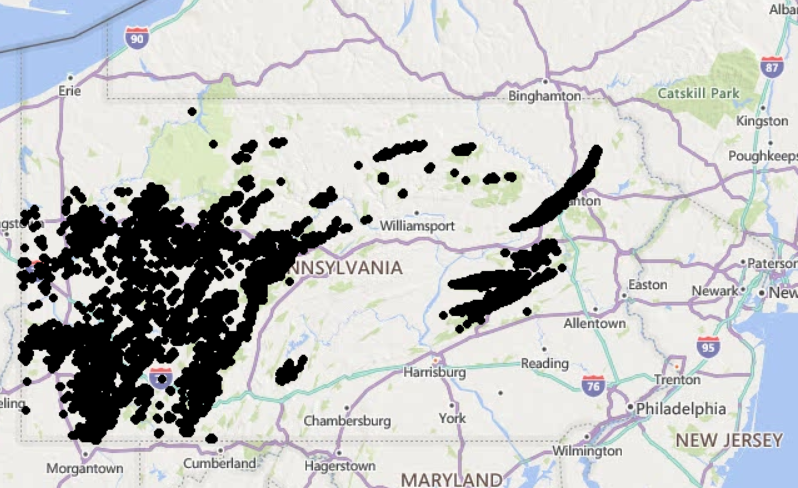 Bobby Hughes, the Executive Director of the EPCAMR, has been leading the charge for decades in conjunction with local nonprofits and conservation districts. Hughes explained where the majority of their work comes from; “areas are left with coal waste piles on the side that have been designated side tasks during surface mine operations prior to 1977, those are the abandoned sites that we end up tending to deal with.”

In these mine shafts and around these deep holes, different types of minerals and metals like “pyrite, sulfur, aluminum, and trace metals” end up getting dissolved into local waterways.

Mining often involves digging deep connected systems of tunnels, comparable to an ant farm. When left untouched, these deep holes fill with groundwater that interacts with chemicals and the metals that have been left behind. “When the water reaches the surface through these abandoned mine features, whether they’re boreholes, abandoned air shafts or vertical openings; that water gets exposed to the oxygen at the surface and all these metals tend to drop out into the streams, leaving them polluted, and not holding much of anything in terms of aquatic life,” Hughes explains.

City-slickers may not have mines on the top of their mind, but it’s important to consider the work taking place up North and how it affects Philadelphia. “Philly’s headwaters are up in the Frackville area in Pottsville, we call that area the Southern anthracite coal fields,” Hughes elaborates. He and his team refer to the headwaters leading into Philadelphia as “the Upper Schuylkill.”

The Pottsville area, where the Schuylkill River headwaters begin, is one of the four large clusters of abandoned mine sites along eastern PA. This area is home to the largest amount of impaired waterways caused by abandoned mine sites in Eastern PA, according to a 2020 Integrated Report on PA waterways.

According to that integrated study, 30% of Pennsylvania stream waters are impaired in some capacity, abandoned mine runoff is listed as the second leading cause of impairment. Along with destroying the local habitat for aquatic life, abandoned mine runoff can contaminate drinking water, and lead to corroding on parts of infrastructures such as bridges.

Hughes expressed that the industry’s biggest pain point is a lack of funds. “Our biggest issue right now is making sure we get enough money into these watersheds to clean up the volumes of the water coming out and that are stored in some of the abandoned mines that we’ve looked at are in the billions of gallons of water,” he says. The water inside of mines is still salvageable and usable for a variety of purposes, Hughes mentioned “growing crops, making a greenhouse, and solar farms” as possible solutions.

Employees and volunteers that work in conjunction with volunteers spend time writing grants, monitoring waterways, working with engineers to reverse the effects of abandoned mines, digitizing mine maps for the state, and getting their hands dirty cleaning PA rivers and streams. The EPCAMR is just one of a number of organizations working to rid Pennsylvania’s waterways of the remnants of it’s past. The days of coal are behind us, but the effects of a forgone age remain.

If you love what we do you can support our mission with a one-time or monthly contribution.
Become a Supporter
Tags: Coalition for the Delaware Watershed, water