#FuturePHL: Nominee forwards the future of sustainability in Philadelphia

What makes a world-class city? Traditionally, one would highlight its inspiring architecture, arts, and culture. Good schools and safe neighborhoods likely fall high on the list, too. In recent years, better transportation, land use, and public space have also become priorities for those considering a potential move or visit to an urban area.

From creating innovative models for civic assets to educating and advocating for safer transportation options, each of our three nominees for #FuturePHL are helping Philly’s institutions and people value its commons as an engine for economic prosperity and higher quality of life.

Join us to celebrate during SustainPHL on August 18th at WHYY to find out who will become our #FuturePHL honoree! 5th Square, Philly’s first urbanist PAC, challenges the status quo to create a more sustainable, accessible and dynamic Philadelphia. The organization holds the belief that better policies and investment approaches to transportation, land use, and public space can help realize a better Philadelphia for people in every neighborhood. As a non-partisan political action committee (PAC), 5th Square interviews, evaluates, and rates candidates in the city’s mayoral and council races based on their records and campaign stances and their willingness to support an urbanist policy platform. The organization endorses, funds and provides volunteer support for the very best candidates.

Named for a reference to the public space at City Hall, this recently formed, all-volunteer organization is credited with helping to kill VIP parking on City Hall’s apron, returning it to public space. 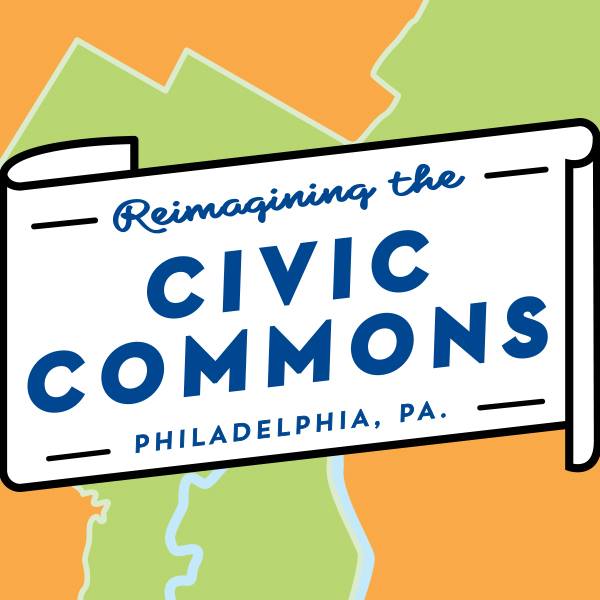 In 2014, the Knight Foundation and the William Penn Foundation formed a partnership to Reimagine the Civic Commons. The underlying premise is that parks, libraries and other “civic assets” can be better leveraged to promote greater social and economic integration, retain residents and foster community and economic development. The two foundations invested a total of $11 million to create a “civic commons collective” of five model projects in Philadelphia. Led by Fairmount Park Conservancy, the Civic Commons Collective hopes to foster a collaborative environment among Philly’s non-profit network, while repurposing and repositioning the city’s existing urban infrastructure into new amenities for the city and its neighborhoods. The five projects include Discovery Center, the Viaduct Rail Park, Bartram’s Mile, Lovett Library and Park and Centennial Commons. Included in the three-year initiative is a focus on data collection, storytelling and the exploration of collaborative models.

The Fairmount Park Conservancy, the non-profit tasked with promoting and developing Philly’s park and recreation spaces, heads up the collaborative effort, convening partner organizations and serving as a hub for the initiative. They are also overseeing the Centennial Park project, an effort to transform a section of W. Fairmount Park.

Making Bicycling a Safe, Fun Way to Get Around the Region

Started over forty years ago as a group of cyclists having a beer in a bar at 30th Street Station, the Bicycle Coalition of Greater Philadelphia is an education and advocacy organization that partners with community, government, and the public/private sectors to effect change that makes Philly’s streets safer for everyone. The group advocates for a connected network of streets safe for bicycling and walking with successes that include getting over 200 miles of bike lanes, inspiring the Circuit trail network and bringing bike share to Philadelphia. Building on these victories, the coalition continues to work for more and better bike lanes throughout the city and the final connections of 25 miles of Circuit Trails.

The Bicycle Coalition recognizes that Philly’s streets will only be safe for bicyclists when they are safer for pedestrians and motorists too. In addition to advocating for a Vision Zero program and Complete Streets Commissioner in City Hall, the group also takes to Harrisburg, lobbying for changes in state policy to make our roads safer for all users.

In addition to its advocacy efforts, the coalition offers comprehensive resources to help residents and visitors feel comfortable riding around the city. From commuting tips to youth and women’s programs, there is something for everyone seeking to get around the city on two wheels.

We congratulate the FuturePHL Award nominees and look forward to celebrating them at the SustainPHL awards on August 18th! Get your tickets online here.

If you love what we do you can support our mission with a one-time or monthly contribution.
Become a Supporter
Tags: 5th Square, Bicycle Coalition of Greater Philadelphia, Fairmount Park Conservancy, SustainPHL, SustainPHL Nominees

“Love Your Park” Cleanups Have Adapted to Socially Distant Times

EVENT: It's no surprise that the passion and leade