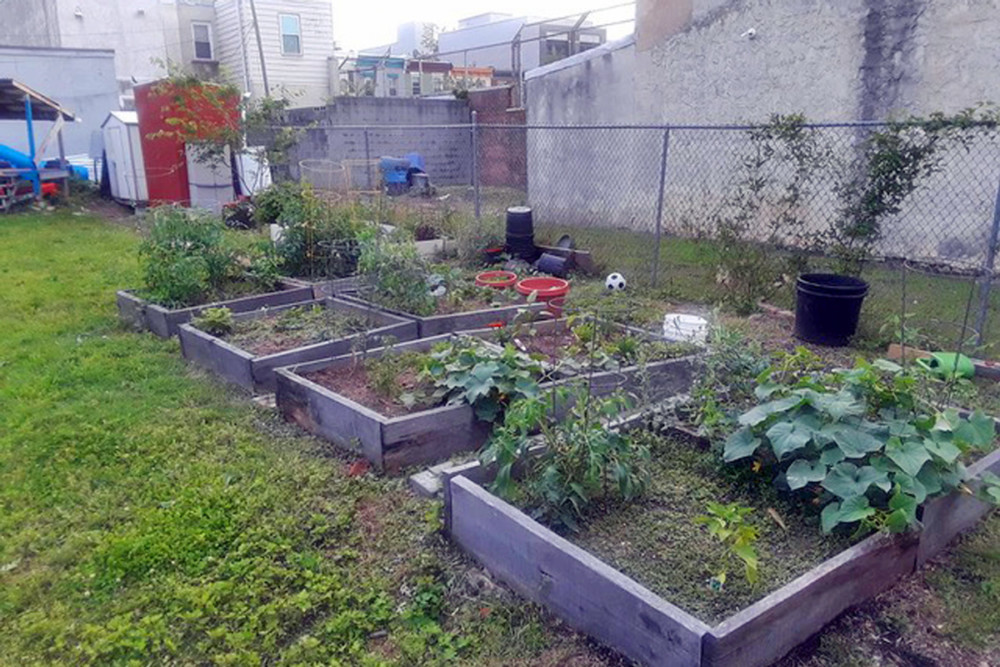 Collins Smith Barrack: The Philly Garden That Found a Way for Kids and Adults to Play

Gardens are like adult playgrounds, but when making gardening kid-friendly, you consider creating a play garden.

The children in the East Kensington neighborhood needed a place to play, and in searching for a place, they were damaging an existing garden.

Neighborhoods like East Kensington lack that space. With gentrification, extra measures must be taken to preserve what little space exists.

To fill the void, Julius Rivera, 46, started the Collins Smith Barrack Play Garden over 15 years ago.

What is a play garden?

Rivera, a special education teacher, knows how important safe play is for children. While many gardens aren’t typically kid-friendly, children and parents benefit from the play garden. According to Rivera, “The priority of the space is to make a green space available to children, and it gets used in both ways. Gardeners come and they garden, and they’ll bring their young children.” While their parents tend to their tomato plants, the little ones might play with toy cars in the sandbox.

During COVID, the play garden took on a whole new use, and because of school closures and social distancing, it became a refuge for the community. Playgrounds were closed, but children in the community were able to come to explore. Adults found catharsis in the grounding act of gardening.

Rivera purchased his house across the street from the play garden twenty years ago. At that time, the lot was unused, since the city demolished the abandoned house that burned down. When he moved, the section of the city was lacking, but once the neighborhood became desirable, developers started eying the 2,045-square-foot piece of land that housed the garden.

Under the threat of demolition, Rivera met Jenny Greenberg, executive director of the Neighborhood Gardens Trust (NGT) in 2018. The mission to save the garden became clear and an alliance was formed.

The nonprofit obtained ownership of the play garden from the Philadelphia Redevelopment Authority. “The Neighborhood Gardens Trust worked with the Collins Smith Barrick Playgarden leader to permanently protect the land so it would not be lost to development,” Greenberg explains. “ Since then, we’ve worked with Julius and our partners at Pennsylvania Horticultural Society to ensure the play garden has the infrastructure and support they need to serve the community and thrive long term.”

With its partnership with the NGT, the Collins Smith Tract Play Garden has become a mainstay and vital resource for community members.

Currently, the garden has 15 plots, with 20 families enjoying the space. Three to four families use the space throughout the day, and over 50 locals come out for egg hunts and cleanups.

The lot now has a water pump and two sheds, allowing for use of the gardens regardless of the weather. “One shed has tools, and one has children’s games and books. So that if the weather isn’t permitting staying out in the elements, well then you know you have a sheltered space to go into,” Rivera says.

The play garden has been a vital addition to a community that is constantly in flux. The changes, however, seem to appeal to adults. The area is becoming more desirable, and while housing values seem to increase, bars are opening up in vacant spaces. According to Rivera, “If the garden weren’t here, where would I take my children? The community needs spaces that don’t cost money where you can take your children.”

If you love what we do you can support our mission with a one-time or monthly contribution.
Become a Supporter
Tags: Collins Smith Barrick, Neighborhood Gardens Trust