A few weeks ago, I went to Bonnaroo for the first time. Between the music, people, and positive energy, there was a lot to love. But one of the things I loved most about Bonnaroo wasn’t any of that – it was the efforts they made to lessen their environmental impact.

Bonnaroo sets the standard for green music festivals across the world. This year, they won the Pursuit of Excellence Award from the governor of Tennessee, which recognizes previous Environmental Stewardship award winners who continue to demonstrate environmentally friendly practices. There are many ways Bonnaroo maintains its environmentally friendly reputation. Here’s what they do:

With over 80,000 people attending Bonnaroo each year, waste is inevitable. The Clean Vibes crew, which is dedicated to waste management, is instrumental in reducing waste in landfills. In 2012, they diverted 237 tons of waste to recycling and composting centers.

Clean Vibes volunteers are stationed throughout the festival at disposal centers – containers labeled for compost, recycling, and landfill waste – to educate attendees on where to properly place their waste. To my surprise, the majority of waste was diverted to the compost bin.

One thing that initially disturbed me about Bonnaroo was the large amount of beer bottles, containers, and other trash strewn across the 700-acre farm. To solve this, Clean Vibes post-show volunteers spend two days cleaning up litter and disposing of it accordingly. They also sort through the disposal containers to ensure everything is in the right place.

The Clean Vibes Trading Post also provides an incentive for festival-goers to dispose of waste properly. Attendees are encouraged to bring in bags of recyclables to the Trading Post for prizes ranging from sunscreen to free tickets.

In an effort to lessen the reliance on bottled water and curb dehydration, Bonnaroo also features free water stations throughout the festival grounds. The water, sourced from on-site ground wells, was a lifesaver in the Tennessee heat.

Recently, Superfly Presents and AC Entertainment (the co-creators and producers of Bonnaroo) teamed up with Tennessee-based Sustainable Future and Vermont-based Encore Redevelopment to implement the country’s first permanent solar array for a music festival. The system generates over 61,000 kilowatt-hours per year, which accounts for about 20% of the festival’s energy consumption.

In addition, Bonnaroo’s Carbon Shredders teamed up with We Are Neutral to promote carbon offsets to patrons and artists alike. Artists are encouraged to drink from reusable water bottles and choose musical instruments made from FSC-certified forests, while patrons are taught on how to reduce their environmental impact in everyday life.

To reduce CO2 emissions and lessen the reliance on fossil fuels, carpooling is also heavily incentivized. Anyone who carpools with three or more people are entered for a chance to win a V.I.P upgrade among other prizes. I carpooled with four friends, but some people I talked to found new carpool mates via Facebook or Zimride.

It’s important to note that despite Bonnaroo’s green efforts, driving is certainly not sustainable. My friends and I considered bringing a Prius, but the lack of trunk space left us with only one option – a gas-guzzling SUV. Carpooling helps, but it isn’t an adequate solution.

Bonnaroo’s food vendors are given a list of local Tennessee farms for meat, produce, and more to ensure local, healthy foods. Paired with the biodegradable containers and cutlery, the food options are surprisingly sustainable. 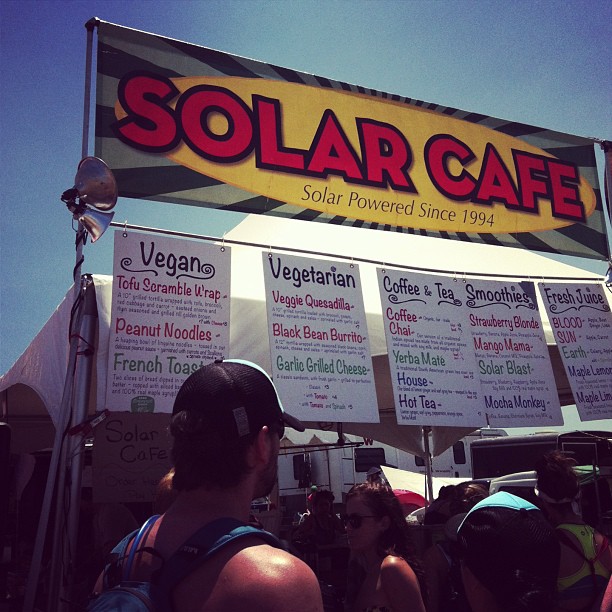 Some vendors like the Solar Cafe are almost completely sustainable. Solar panels power the small stand, which serves gourmet options ranging from Nutella crepes to lattés brewed with fair-trade beans.

Camped out in Planet Roo are a variety of nonprofit organizations dedicated to protecting the planet, where festival-goers can learn more about how to help make an impact. Those who work up an appetite in the process can check out the Planet Roo Café, which is touted as being 100% waste-free. After eating, the Bonnaroo Learning Garden educates guests about sustainable eating and growing your own garden.

If attendees want a break from the Tennessee heat, Bonnaroo’s air-conditioned cinema tent features a multitude of documentary screenings on a wide range of environmental issues. Although I never made it to the tent, I’m planning on it next year.

The Standard-Bearer of Green Music Festivals

In short, Bonnaroo is the greenest festival out there. From solar power to waste-free eating, they have all the bases covered. Other North American festivals certainly can’t say the same.

1 thought on “Bonnaroo Sets the Standard for Green Music Festivals”

We’re “Rotten To The Core” as the Isle of Lost comes to life on stage with Disney’s most famous villains! Worlds collide as the Kingdom of Auradon welcomes the teenage children of Maleficent, Jafar, Cruella De Vil and the Evil...
Keep Reading
United by Upper Darby Summer Stage
Event

?MycoFest is a three day festival focused on ecological literacy and art on the property of StoneHedge Gardens in Tamaqua, Pennsylvania –  a stones throw from the gorgeous Locust and Tuscorora Lakes and their rich parks!  Join us in becoming...
Keep Reading
United by MycoSymbiotics